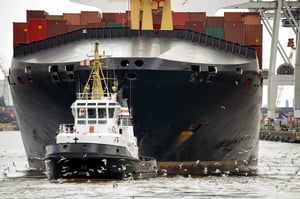 As a USCG Licensed Captain, a lot of opportunities come my way to earn a living. One of my favorites is working as a delivery Captain. I would like to share one of these trips that was like no other and nearly cost my crew and me our lives...

I was sitting in a restaurant in Annapolis Maryland a few years ago when I met a couple who had just bought a 58 foot boat that they needed to have moved down to Ft. Lauderdale, Florida. After the evening’s festivities were over we agreed that I was going to help their family with moving their new toy.

On board would be the husband and wife who were both experienced boaters, their two children, a 9-year-old boy and a 7-year-old girl. The trip would take place in early December and be completed prior to the holidays. The planned route was that we would travel the length of the Chesapeake Bay and exit into the Atlantic Ocean once we were in Norfolk, Virginia. Once we were out in the Atlantic we would be traveling southward along the coastline ducking inside to the ICW in the event of bad weather or the need for additional supplies or repairs.

We departed at the crack of dawn and had an uneventful day. Along the way I would ask the owners questions that pertained to the rules of the road to check understanding and educate them whenever necessary. I also took the time to check out all of the electronics and autopilot controls. This boat was missing nothing and was appraised at 1.6 million dollars. Experience has taught me not to be impressed with the price, but with the operational functionality of the vessel. This was one impressive boat and much to my surprise everything seemed to be working. Now the only thing to worry about was my crew.

As the day progressed I determined that we were going to be heading out into the ocean after dark. The area around Norfolk is a very heavily traveled area by numerous recreational, commercial and military vessels. As day becomes night the area can become very challenging to navigate even by an experienced Captain. I decided that it would be best for me to get some sleep prior to entering this heavily traveled area. A course was set, the autopilot was on and clear instructions to the crew were given. The most important instruction was to stay on the preplanned course and speed and not cross the Chesapeake Bay Bridge Tunnel area without waking me. I was assured all was understood and that my instructions would be followed. So I was able to now settle down into what nearly became my last sleeping moments...

I was abruptly wakened by the screams of sheer terror coming from the owner’s wife requesting me to go topside and take control of the helm. I immediately jumped into action not asking any questions along the way. Once on deck I saw two of the brightest white spotlights I have ever seen shinning directly on the helm. There was no time to think and analyze the situation; I immediately turned the helm hard to starboard. At that very moment the Captains of what was two very large seagoing tugboats pulling what appeared to be several barges also turned their wheels hard to starboard. All that I could do now was to wait for the impending impact of our vessels hitting to occur along with the cold rush of water and the effects it would have on the crew and myself. At this time of year the water temperature was around 42 degrees and the moon had not risen. If we went into the water hypothermia would have disabled each of us and we would perish within just a matter of a few minutes. The only thing on our side was that I have a rule on these trips that all crew must wear lifejackets while on deck. In this case I think the lifejackets would have just made it easier for the recovery of our bodies.

In what had seemed to be a lifetime it was all over. We had missed by no more than the width of a football. It was almost as if King Neptune himself had decided that it was not our time to go and stepped in to prevent this tragedy from occurring. The truth be told our survival was due more to knowledge then that of luck or by any intervention from the heavenly bodies.

Let’s break down the events that allowed me and my crew live another day to tell this story. First, each Captain involved had a thorough knowledge of the Rules of the Road that allowed the necessary actions to take place-avoiding loss of life. In this case there were three rules that prevented this situation from becoming a tragedy:

Rule 16 – Action by Give-way Vessel: Every vessel that is directed to keep out of the way of another vessel shall, so far as possible, take early and substantial action to keep well clear. In this case my vessel was considered the give-way vessel. We were clearly not following this rule prior to me taking the helm.

Rule 17 – Action by Stand-on Vessel: This rule has 3 components:

Now that the excitement was over and my knees stopped shaking my new target was the owner of the vessel who, from this day forward, has been known as reckless Randall. However, fate had once again stepped in. Reckless Randall’s wife took him below and he was not seen on deck until the following morning. I am not sure what she had said to him but it was clear my input was no longer necessary.