Captain's License So, You Want to be a Captain? Real-life Story

My Life as a Captain

Tags: Captain's License So, You Want to be a Captain? Real-life Story

It was my good fortune to grow up in the beautiful lower Connecticut River Valley. For eight years, during my teens and early twenties, I worked on the river as a crew on the riverboats that ran with the Essex Steam Train.

At that time, it was a separate navigation company that operated several tourist boats of varying sizes and tonnage. It was a great seasonal job, and I learned a lot from many very experienced, as well as new, captains, but it was just that: a seasonal job.

When I completed college, I got a "real" job as a graphic designer that eventually took me to a successful career as an art director in New York City. But by the late 2000s, and by this time in my mid-30s, I had lost my passion for that career and wanted a change.

While visiting a friend in the U.S. Virgin Islands, I met and talked to several charter boat captains and found my new passion! I went back to NYC, got my SCUBA certification after work, gave my notice a few months later, and began the process of getting my captain's license.

Since all my sea time was more than ten years old at this point, I needed to get my 90 days of recent time. So, I went back to the now one riverboat that was now owned by the Essex Steam Train and worked a few weeks there before applying to and working for American Cruise Lines on one of their cruise boats running up the ICW out of Jacksonville, FL, for several months.

With the sea time now taken care of, I then turned my attention to the exams. Having heard from a colleague about Mariners Learning System, I thought I would give it a try. Online, self-learning didn't really excite me, but I found that the program was very straightforward. After several weeks of cramming, I completed the courses, took the proctored tests, and passed. I was now a captain with a 100 Ton Master's + Towing Endorsement!

But it was 2009, and there was a recession, so captain's jobs—especially for new captains—were hard to come by. So, I went back and worked on the riverboat at the steam train while I sent out applications.

After a month, the president of the railroad took me to lunch and offered me the job as the lead captain job of the riverboat. The company had acquired the boat from the previous company, but they were all railroad guys and didn't know the nuances and requirements of boat operations.

Since I was intimately familiar with the boat and the train operations, I could make the operation work seamlessly as part of the combined organization. It was really a jack of all traits job: the position entailed hiring and training captains and crew, developing and maintaining a security plan and safety program, maintaining and upgrading to vessel and facility, and acting as liaison with the U.S. Coast Guard, Department of Homeland Security, and Federal Transportation Administration, including becoming familiar with all the state and federal laws and regulations relevant to our operations. As part of our security plan, I planned and implemented training workshops, emergency drills, and exercises involving multiple local, state, and federal agencies that served as a benchmark for other vessel operators in the region.

After eight years in that position, I was consulting for other operations and being asked to speak at the regional Passenger Vessel Association meetings.

Side note: I found membership in the PVA to be an invaluable source of information and help and would highly recommend it. 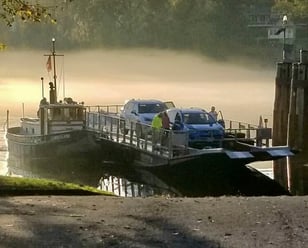 Through this experience, I got to know many commercial boat operators in the region, in particular, those on the Connecticut River, including the captains of the State's two river ferries. Eventually, in 2018, when a position opened on one of those boats, one of the lead captains recommended me for the job, and I was hired.

Since then, I've captained both the Chester-Hadlyme ferry (a conventional double-ended ferry) and the Rocky Hill-Glastonbury ferry (a tug and barge, and the oldest continuously operated ferry in the U.S. having started in 1655).

As a result of the post-COVID labor shortage, several of the other commercial boat operations on the river found themselves short captains, so I also operated all but one of the commercial boats operating within the state on the Connecticut River in 2022.

Additionally, I was referred to and contacted by an owner who was looking for a captain to bring their 50' Azimuth up from North Carolina. I have also met with the owner of a 45’ Meridian that was looking to operate his boat for small charters, neither of which panned out because of my lack of available time. 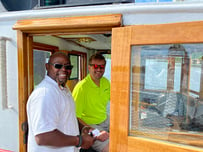 But it's been reassuring to know that my name, experience, and reputation are known in the area and generating ample work opportunities for me.

If only there were more days in the week and a longer operating season….

Despite not being a dive boat captain in the Caribbean, I'm still enjoying the new career that I wanted.

I have Mariners Learning System to thank for providing me the opportunity to achieve the initial license and setting me on this path.

Can I Sail a Boat Without a License?

What is the Largest Boat You Can Operate Professionally with a Captain's License?