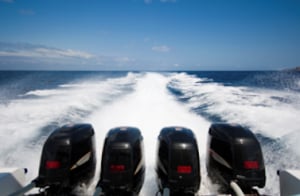 The Navigational Rules of the Road (Rule 6) states that you need to set a safe speed in all conditions of visibility. This obviously does not mean the same “safe speed” applies in good as well as restricted visibility. The first requirement of this rule is to consider what the state of visibility is because safe speed in any condition must be closely related to the immediate circumstances and conditions at hand. A boat at high speed has a large amount of force.  With an untrained operator, this force can be dangerous.


The following different factors should be considered to determine safe speed:

Besides Heavy Seas, Traffic Density, and Visibility, there are additional external factors that will have an effect on your vessels ability to run at a safe speed.

In narrow channels and canals, a vessel moving through the water will cause the “wedge” of water between the bow and the nearer bank to build up higher than on the other side.  This bank cushion tends to push the bow away from the edge of the channel.

When meeting another vessel close aboard, bow cushion and stern suction occur between the vessels much the same as bank cushion and suction.  Helm corrections should be used to compensate.  As both vessels move through the water, the combined effect is greater than what a single vessel encounters from bank interaction.  Caution should be used so the bow does not veer too far from the intended track and the stern swings into the path of the other vessel.

All vessels are responsible for their wake and any injury or damage it might cause.  Only a poorly trained or ignorant boat operator trails a large wake through a mooring area or shallows, tossing vessels and straining moorings. A large, unnecessary wake, particularly in enclosed waters or near other smaller vessels, is unnecessary and can cause damage or injure others.