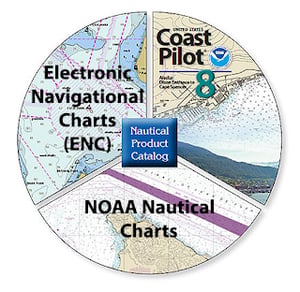 Many different types of symbols and abbreviations are used on nautical charts.  This system provides mariners with a quick way to determine the physical characteristics of the charted area and information on Aids to Navigation.
These symbols are uniform and standardized, but may vary depending on the scale of the chart or chart series.  These chart symbols and abbreviations are shown in the Pamphlet ‘CHART No. 1’; published jointly by the Defense Mapping Agency Hydrographic Center and the National Ocean Service.
Buoys are shown with the following symbols:
Lighthouses and other fixed lights use a basic symbol that appears as a black dot with a magenta “flare” giving much the appearance of a large exclamation mark (!).  Major lights are named and described; minor lights are described only.
Daybeacons are indicated by small triangles or squares, which may be colored to match the aid.  Daybeacons, also commonly called day marks, are always fixed aids.  That is, they are on a structure secured to the bottom or on the shore.  They are of many different shapes.
Prominent landmarks, such as water towers, smoke stacks, and flagpoles, are pinpointed by a standard symbol of a dot surrounded by a circle.  A notation next to the symbol defines the landmark’s nature.  The omission of the dot indicates the location of the landmark is only an approximation.
Wrecks, Rocks, and Reefs are marked with standardized symbols, for example, a sunken wreck may be shown either by a symbol or by an abbreviation plus a number that gives the wreck’s depth at mean low or lower low water.  A dotted line around any symbol calls special attention to its hazardous nature.
A system of abbreviations used alone or in combination, describes the Bottom Characteristics allowing selection of the best holding ground when anchoring. Knowledge of bottom quality is very important in determining an anchorage.
Shorthand representations have been developed and standardized for low-lying Structures such as jetties, docks, drawbridges, and waterfront ramps.  Such symbols are drawn to scale and viewed from overhead.