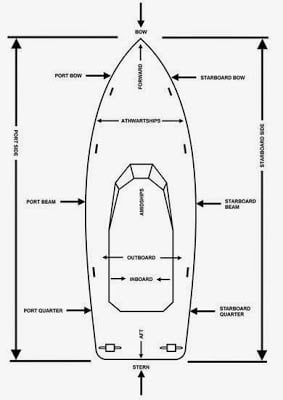 As with any profession or skill, there are special terms that mariners use. Learn many of the common terms that will be used in routine conversation.
The front end of a boat is the bow. Moving toward the bow is going forward; when the boat moves forward, it is going ahead. When facing the bow, the front right side is the starboard bow, and the front left side is the port bow. The central or middle area of a boat is amidships.
The right center side is the starboard beam, and the left center side is the port beam. The rear of a boat is the stern. Moving toward the stern is going aft. When the boat moves backwards, it is going astern. Standing at the stern looking forward, the right rear section is the starboard quarter and the left rear section is the port quarter.
Starboard is the entire right side of a boat, from bow to stern and Port is the entire left side of a boat, from bow to stern. A line or anything else running from side to side is athwartships. Inboard is from either side of the boat toward the centerline. However, there is a variation in the use of outboard and inboard when a boat is tied up alongside something (e.g., pier or another vessel). In this example, the side tied up is inboard; the side away is outboard.
Going topside is moving from a lower deck to a weather deck or upper deck. Going below is moving from an upper deck to a lower deck. Going aloft is going up into the boat’s rigging. The weather deck is the deck exposed to the elements (weather). Lifelines or railings, erected around the edge of weather decks, are all technically called lifelines, although they may have different proper names. Windward is moving in the direction from which the wind is blowing; toward the wind. Leeward is the opposite point from which the wind is blowing; away from the wind. The term is pronounced “loo-urd”.