Testing for Colorblindness and Restrictions for Captains 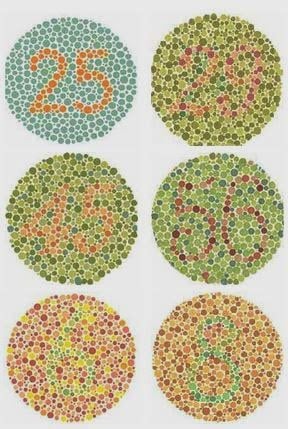 Many people who've been diagnosed as being color blind believe they cannot get a captain's license. Learn more about the colorblind test and restrictions. This is 100% NOT TRUE! If it sounds like I am talking about you then be sure to read on....

Color blindness is the inability to distinguish the differences between certain colors. This condition results from an absence of color-sensitive pigment in the cone cells of the retina, the nerve layer at the back of the eye.

Color blindness affects approximately 1 in 12 men (8%) and 1 in 200 women in the world. There are different causes of color blindness. For the vast majority of people with deficient color vision the condition is genetic and has been inherited from their mother, although some people become color blind as a result of other diseases such as diabetes and multiple sclerosis or they acquire the condition over time due to the aging process, medication etc.

The type of test you're probably most familiar with is done using Ishihara plates or pseudoisochromatic plates (PIP). An Ishihara plate shows an assemblage of color dots with a number in the middle made with different colored dots. Ishihara plates can help diagnose red-green color vision defects. It isn't the perfect test, though -- sometimes the colors in one set don't quite match up with the plates in a different set, or maybe they look different in one kind of lighting than in another.

Another option is the Farnsworth Lantern Test (FALANT) which is often regarded as the simplest and most accurate color vision test. Research has proven this test has a lower fail rate than other commonly used tests such as the pseudoisochromatic plate  books. The test consists of showing a pair of vertically oriented lights consisting of combinations of either red, green or yellow-white. The test subject is asked to identify the two colors (some of which are identical). Nine color pairs are administered during the test, beginning with a red/green combination, to allow the patient to see these two colors prior to seeing a white light, which decreases testing errors. The examinee is shown the target for only two seconds, as color-deficient patients can sometimes correctly identify the colors with prolonged exposure. The yellow-white light, or one of the identical paired lights, employs a 50% neutral gray filter to reduce luminance cues to the color-deficient patient. Random presentation reduces memorization of the test sequence.

In the Coast Guard's world there are no intermediate levels of colorblindness the test conducted by your physician is a pass/fail examination. If you are unable to pass your color vision test, don't worry, the U.S. Coast Guard will simply impose a daytime restriction on your license. This just means that you cannot operate a vessel professionally from sunset to sunrise.

Bottom line - Color blindness, no matter how severe, will not prevent you from qualifying for a USCG issued Captains License!

Mariners Learning System is the go-to place for education and information on obtaining a Captains License. Fully certified by the U.S. Coast Guard, we are known for providing Knowledge and Knowhow... Anytime, Anywhere and help thousands of students pass their Captain's exam each year!