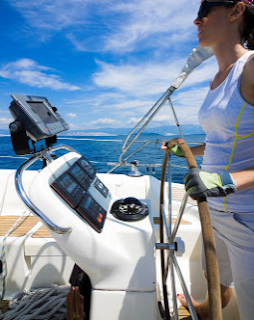 There is nothing magical about a waypoint: it is simply a position that has been stored (‘entered’) into your GPS memory. Usually a waypoint is either your intended destination or some intermediate point that you want to pass through on the way there – hence the name ‘waypoint’.
When entering waypoints it is important to be aware that many GPS receivers require latitude and longitude to be given in a very rigidly defined format. It is quite common, for example, for a GPS to require that the degrees of longitude be given as three figures. So if you enter 1°26’. 10W as ‘1 26 1’, the GPS may store this as 126°10’.00 W.
Your receiver may also require that the minutes be given in two (or three) places of decimals, in which case the same entry would be stored as 0°12’.61 W. So whichever process your GPS requires make sure you have a clear understanding of how the data needs to be input.
Another very common mistake is to forget to enter the direction of latitude (N or S) or longitude (E or W). If you are on your way to New York City, for instance, you probably take it for granted that it is west of the prime meridian, but your electronic GPS does not.
One or more waypoints that you intend to pass through in a particular order are called a route or sail plan. Some of the simplest GPS receivers require that you enter your waypoints in the correct order, but most units now allow you to pick, choose and rearrange your waypoints. This is particularly useful for fishermen who want to store the lat and long of all the local fishing holes in their GPS memory during the fishing season and quickly assemble the relevant ones into a route when fishing a tournament or on a weekend trip.
In planning a route for waypoint navigation it is easy to concentrate solely on the waypoints and to forget that the only reason they are there is because you are intending to travel from one to the other, and that – circumstances permitting – you will be doing so in a series of straight lines. Rather than putting a waypoint off each main cape, peninsula, or bluff along the way, and at a few buoys in between, it is much better to draw the route as a series of straight lines first and then put a waypoint at each corner.